What’s the difference between a translator and an interpreter?

What’s the difference between a translator and an interpreter? 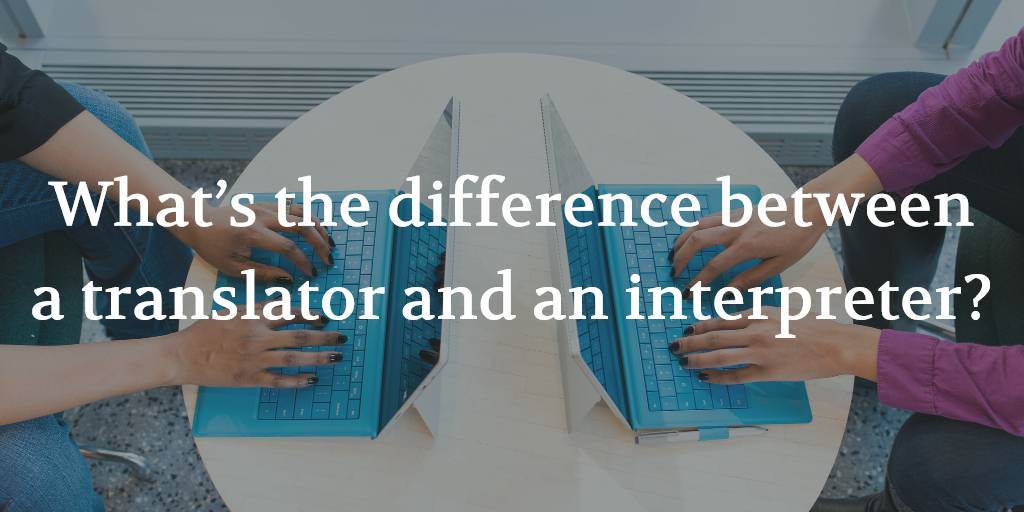 If you’re new to the world of language services – perhaps because you’re looking to expand your business into new markets, for example – it can seem like a complex and unfamiliar field. To the uninitiated, the terminology used by language services providers can seem arcane to say the least (which is ironic for an industry that exists to promote clear and effective communication). Terms which seem interchangeable can turn out to mean quite different things. Proofreading or editing? Transcription or subtitling? It can all get a bit overwhelming at times.

(And don’t worry if you’re still confused by distinctions like those: we’ll be covering that particular topic in the not too distant future.)

For now, we’ll be looking at one commonly-misunderstood pair of services: translation versus interpreting, and what separates the two from each other. The differences between them aren’t always immediately obvious, but they’re actually vastly different roles which require quite distinct skill sets and are used for separate purposes.

Let’s start with a translator. A translator deals, in some form, with the written word. They may convert many different kinds of documents – certificates, slide shows, handwritten letters, software strings – but as long as they involve text on a page or a screen, this is almost certainly a translation job. Translators take what’s been written and rewrite it in their own language (a professional translator only ever translates into their native language, of course), ultimately producing something that can be read by a third party who doesn’t speak a word of the original language.

All of this means that a translator’s ultimate goal is to be invisible. The perfect translation is one which reads like it was originally written for the target language: the translator’s hand in the process should be completely undetectable. This is a tough goal, but it’s theoretically attainable if the translator is good enough, because working with text gives you the time to draft, edit and tweak what you produce. You can keep on trying until you get it just right.

Interpreting is quite a different beast, because interpreters deal with the spoken word. The most obvious place you might have heard them is on the news, at an international event like a United Nations assembly or in the European Parliament, where an interpreter relays what a foreign politician is saying in real-time. This is called live interpreting, and it’s an incredibly challenging and demanding task, but interpreters work in many other settings as well.

Many interpreters work within the justice system, assisting with things like police interviews and court appearances if someone is involved in a case and isn’t confident in the local language. Other interpreters assist with things like business negotiations – or even international treaties. In cases like these, you’ll often see two-way interpreting happening: a single interpreter mediating between two speakers, working in both languages. This gives us another hint as to the differences between interpreters and translators.

Naturally, accuracy and comprehensibility are just as important to an interpreter as they are to a translator, but interpreters also have to balance a desire for flair and elegance with the need to keep up with the rapid pace of the spoken word. An interpreter can’t listen to an entire speech, then draft and redraft their own version of it until it’s absolutely perfect. Instead, they have to work sentence by sentence, matching the speed of the original speaker. If they fall behind, crucial information could be lost.

So a set of clear distinctions is now starting to form, all stemming from one basic premise: interpreters speak, translators write. These alone are two very different skills, which explains why most language professionals end up specialising in one service or the other rather than attempting to do both. But the nature of the work also places additional demands on linguists: translators’ work must be precise, beautiful and read like it never existed in any other language. Interpreters’ work must be fast and fluent, and may often need to prioritise clarity over stylistic cleverness.

As a result, even the basic strategies these professionals use can be quite different. For example, both professions sometimes have to make compromises in the way they transfer meaning from one language to another, but they do so different ways and for different reasons. Let’s imagine a particularly tricky joke in a foreign language, one which relies on famously hard-to-translate features like puns and homophones. If the joke simply will not work in another language, then a translator might substitute a different joke which uses the same tricks or themes, while an interpreter might have to make a snap judgement and quickly explain the punchline, or even simply say something like, “the speaker has just made a joke about her home country”.

‘The same, but different’: that, in short, is how we could describe these two disciplines. In “A short history of translation”, we learnt that translation is an ancient profession with thousands of years of history, dating back to the earliest days of the written word. Interpreters have probably existed for even longer, in the sense of someone who mediates between two spoken languages, but some elements of the profession have only been codified in relatively recent times. The importance of conference interpreting grew in importance in the early 20th century, for example, as French – which had long been the lingua franca of international diplomacy – was replaced with a more multilateral, multilingual approach, reflecting a new philosophy pioneered by the likes of the League of Nations. One of the first conference interpreters, in fact, was none other than T. E. Lawrence – better known as the famous Lawrence of Arabia.

If you’ve read all this and are thinking, “yes, but what does it mean for me?” – rest assured that distinctions like these really do matter, and understanding them will help you out if you’re looking to partner with a language services provider. Translation agencies and other organisations are there to help you work your way through issues like these, but if you know what you need right from the start and are able to explain it clearly to a prospective partner, it can save time, money and effort for everyone involved. And if you understand the industry yourself, then you’ll have an easier time spotting another important difference: between the cowboys who make it up as they go along, and the professional translation agencies who really mean business. And that’s perhaps the most important distinction of all.