The importance of quality assurance in the translation process

The importance of quality assurance in the translation process 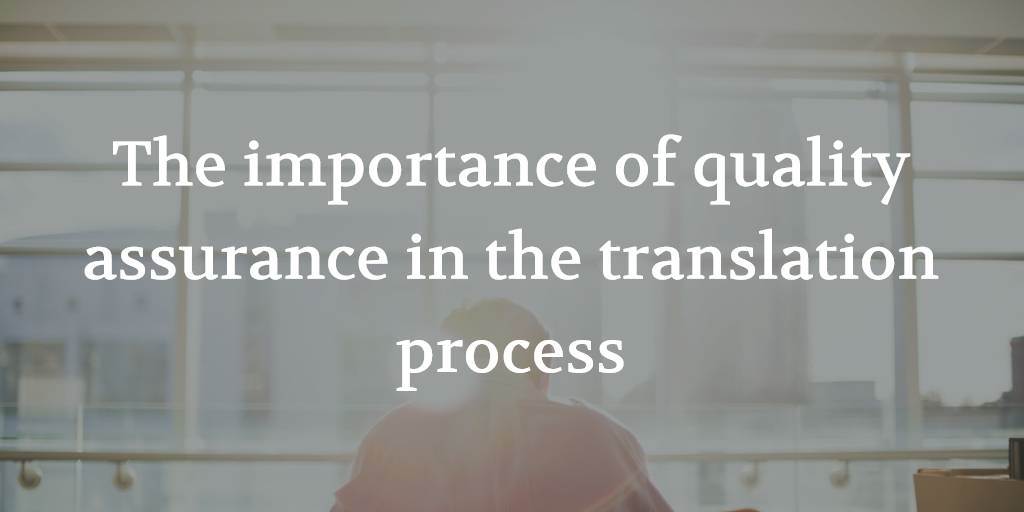 One of the keys to understanding the translation industry is realising that, on some level, it operates like any other.

Not what you expected to hear? That might be because translation is an often-misunderstood business. (On the other hand, if it sounds like a statement of the obvious, well, you have our apologies – but we should also congratulate you as well for being so clear-sighted.) Many people still see translation as either a rote administrative task or some quasi-mystical thing, utterly incomprehensible to those not trained in it.

The reality is quite different from either of these preconceptions – but then that’s why we’re here, to dispel the myths and clear up the misunderstandings. The fact is, yes, translation is a skilled discipline which requires a unique combination of skills and experience – but the translation industry can and does use many of the same techniques and processes as other industries to keep production on track, on time, and on budget. This is a big part of why translation agencies make such valuable partners on localisation projects – but hold on to that idea, we’ll come back to it later.

Let’s go back to this idea of processes. Think about quality assurance, for example. Chances are, whatever your own industry, you’ll have some form of QA process in place to evaluate the things you do. Whether you’re in manufacturing, services, retail or some other sector entirely, someone in your business will be looking out to make sure your customers are satisfied with the product or service they’re receiving. Here’s the thing: translation businesses are no different – at least, the reputable ones aren’t. So what does QA look like in the translation industry, and how is it done?

It all starts with the original translator, of course. Any translator worth their salt will rigorously check and double-check their own work. They’ll check their spelling and grammar: not just using an automatic tool, which can be unreliable (a computer doesn’t know that horses don’t typically have reigns, for example, unless they’ve been appointed to government by some mad Roman emperor) but actually manually checking for themselves that everything is correct and proper, referring to outside resources like dictionaries and style manuals where necessary. Spelling is by some measures the simplest part of a linguistic QA analysis, since it’s basically a binary right-or-wrong issue, but it’s absolutely essential, and it requires real care and attention to detail. Then there are other issues like factual accuracy, readability and the rather more nebulous sense of whether a text “feels” right – and believe us, a good translator will know if it doesn’t. As a result, a translator will often take their work through several drafts before submitting it to their project manager.

This is far from the end of the QA process, though. In fact, it’s barely the beginning. Two heads really are better than one when it comes to the written word: nobody’s perfect, and even the very best translators can miss occasional errors just through over-familiarity with their work. So getting at least one other person to take a fresh look at a text can make a huge difference to its quality.

Dedicated linguistic QA workers can take on a number of different roles. In theory, one person could do everything; in practice, more is better. Depending on the size, visibility and importance of a project, the QA chain could include a very large number of people. Two heads are better than one and three heads are better than two, but of course, you do have to balance the desire for rigorous testing against things like time and budget constraints, and sheer practicality. But let’s assume money is no object: we’ll imagine that our hypothetical translation is a big glossy brochure for a flagship product, and it needs to be the very best it can be. Who’s going to make sure everything looks good?

First, we’ll talk about the proofreader. Proofreaders check and correct typos, layout problems and so on: the simple binary issues that we talked about before (like spelling). They’re the first line of defence against those little things that sometimes slip under the radar. Then there’s the editor. Editors go a layer deeper, looking at linguistic issues like style and fluency – pinning down that all-important “feel” that a good translation needs to get right – and technical issues like using the proper abbreviations and being consistent with the terms you use. An editor needs to be able to consider the more subjective side of writing and make considered decisions about whether and how to alter what the translation has written, which means they also need an excellent working knowledge of the translation process and of the text’s subject matter. Good editing is crucial if a text is to be accepted within its own industry.

If you want yet another layer of reassurance, you can bring in a subject matter expert: someone who’s less of a pure linguist and more of a specialist in the area(s) covered by the translation. This is particularly useful in fields like law and medicine, which require years of training to become a qualified practitioner. If you want to make sure an epidemiological report is factually accurate, for example, then nobody’s going to know better than a practicing epidemiologist.

At some point in the process, it’s only natural for a customer to want to do their own QA checks – they’re the ones who have to live with the final product, after all. But if they don’t speak the target language, how can they assess whether the translation is satisfactory? This is where back translation comes in. Here, a brand new translator (but please, not Google Translate!) converts the translated document back into its original language – without looking at the original text. The two source-language documents can then be compared to make sure they match closely enough, and you don’t have to be bilingual to participate in the assessment. This final step may be useful if you want to be confident of an absolutely perfect text, but it’s rather an expensive one, because in this case the work of the second translator should be paid.

Even once all of these people have checked the translation and corrected it wherever necessary, the QA process isn’t quite done. It’s essential to provide feedback to everyone involved, so that the translators and other professionals can identify areas for improvement in future – or just so that they can have the satisfaction of knowing they’ve done a good job. This is often the job of the translation project manager, who will also ideally do their own final checks to make sure all the ‘i’s have been dotted and ‘t’s crossed – literally.

All of this really does sum up why translation agencies are so valuable: a lone freelancer can be highly skilled, meticulously detailed and incredibly conscientious, but they can’t compete with the peace of mind that you get from multi-stage linguistic QA. For that, you need an organised, well-connected network of multiple qualified experts – which is exactly what a good translation agency provides.