The continuing importance of translation in a globalised world

The continuing importance of translation in a globalised world 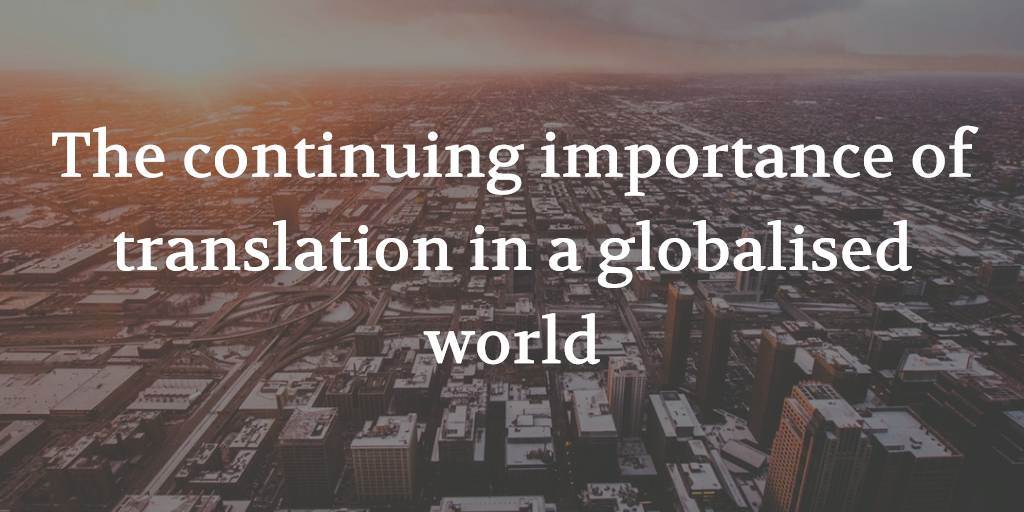 Looking at the modern world, it’s easy to believe that everything is becoming, well, a little more homogenous. Over the last century or two, with the rise of air travel, industrial power and lightning-fast communication, it definitely feels like our planet has become a bit smaller. These days, we’re all pretty multicultural, businesses span all kinds of national and cultural borders, and everyone speaks the same language… right?

Wrong. Because even as economies integrate and business deals cross borders, as education levels rise and more and more people speak foreign languages, there remains an urgent need for translation – not in spite of these things, but because of them. Now more than ever, it’s simply not good enough to offer a product in English, or any other single language, and be done with it.

Here’s what you need to understand in a nutshell if you’re a business reaching out to the world: multilingual marketing and customer support are absolutely crucial to your success in foreign markets. The process of globalisation has made it easier to get your message out to the world, but rather than eliminating the need to localise, it’s brought that need into sharper focus.

Let’s get concrete and look at the statistics of the matter. If you want to talk about a global lingua franca, the obvious place to start would be the English language. Sure, it’s widely spoken, at least compared to many other languages. If you’re a tourist on holiday, the English language gives you a pretty good chance of being understood by someone in most parts of the world. But does everyone in the world speak English? Nope. Do, say, half of the people in the world speak English? Not even close. In fact, the current best estimates suggest that around eight hundred and forty million people worldwide speak English either as a native or a foreign language. In other words, if your business only speaks English, you’re cutting yourself off from about 88% of the population of planet Earth. So much for going global, right?

But hey, maybe we’re being too Anglo-centric. Is there another language that can reach a broader base? The United Nations, surely the most prominent global institution in the world, has six official languages: Arabic, Chinese, English, French, Russian and Spanish. How do they stack up?

Arabic and Spanish are official languages in many countries and have prominent unofficial roles in many others, but each language is still only spoken by under five hundred million people each. If you’re targeting specific parts of the world, then you might get part of the way with either of these, but if you’re targeting multiple countries, some people still won’t understand you. Spanish is widely spoken in South America, but Brazil – the largest and most populous country in the region – has Portuguese as its only official language. Spanish won’t get you very far there. Modern Standard Arabic, meanwhile, can be understood across much of North Africa and parts of the Middle East, but individual national dialects of Arabic can almost be considered distinct languages in their own right – and there are still plenty of countries in this part of the world where Arabic is a minority language at best.

Mandarin Chinese has the broadest reach of the UN’s big six, with total speakers numbering just over one billion, but if globalisation is your goal then it turns out not to be such a great option. Mandarin is not a universal language even in China (Hong Kong, for example, has historically been a primarily Cantonese-speaking city) and relatively few people speak the Chinese outside of the country. Russian, meanwhile, has a fair number of speakers across the Commonwealth of Independent States and elsewhere in Central and Eastern Europe, but it’s a minority language in most of these places and you won’t find very many Russian speakers outside of what used to be described as the Eastern Bloc.

In other words, no single language can reach anything close to the whole planet. So the only conclusion is that global businesses must diversify their language portfolios if they want to reach as broad an audience as possible. In fact, if we add together the total number of native and foreign-language speakers of the UN’s six official languages, we get a measly 3.42 billion, still less than half of the global population. And this is based on the very generous and very unrealistic assumption that there is no overlap whatsoever between these languages; that nobody who speaks English would also speak Spanish, for example. You don’t need us to tell you that this simply isn’t the case in reality – so the real figure, whatever it is, must be considerably lower even than that.

With all that said, maybe you aren’t trying to address the whole world. That’s fair enough; target markets and business strategies can vary dramatically even between neighbouring countries. But these statistics highlight something really important even between nearby nations: if you restrict yourself to only one language while addressing more than one national market, then in the very best scenario you’ll be speaking to half or more of your customers in a language that is not their own. Let’s go back to the example of speaking Russian to countries like Poland, Ukraine or Romania: these are distinct countries with strong individual identities and national histories, and to assume that everyone here can understand your message in Russian (or would want to) would be patronising, bordering on offensive in some cases.

So even if these second-language customers can more or less understand you, this isn’t necessarily good news for your brand image and customer loyalty. Understanding what’s said to you in a second language takes more effort than the innate understanding that comes with hearing or reading your native tongue. So why would customers choose to buy from a company that demands that kind of effort, when there are probably plenty of local businesses that don’t demand so much from them? On top of that, there’s the potential for customers to misunderstand or fail to comprehend what you tell them, and the risk that these second-language customers start to feel like second-class customers because you didn’t make the effort to make things easy for them – or to take account of local sensitivities. And in a globalised world, in the age of product review sites and social media, it’s easy for frustrated customers to make their feelings known to anyone and everyone out there. It’s a recipe for disaster.

The good news is that it’s a disaster that can easily be avoided. All it takes is a willingness to properly localise your business for each of your target markets. And if you ask us, we think that it’s wonderful to see so many languages still alive and flourishing. Yes, it means that internationalisation requires a little more effort and expertise than it might do in a perfectly globalised world – but it also means that all the variety and flavour of the world is still available for businesses to make use of. Local colour remains alive and well, proving that the ongoing march of globalisation doesn’t necessarily mean that everyone has to end up identical to everyone else. And when you put it that way, that’s really quite a reassuring thought.

We know localisation power like no one else, so you know what to do if your product needs to be adapted for new markets. Contact us today!