Will we ever all speak the same language?

Will we ever all speak the same language? 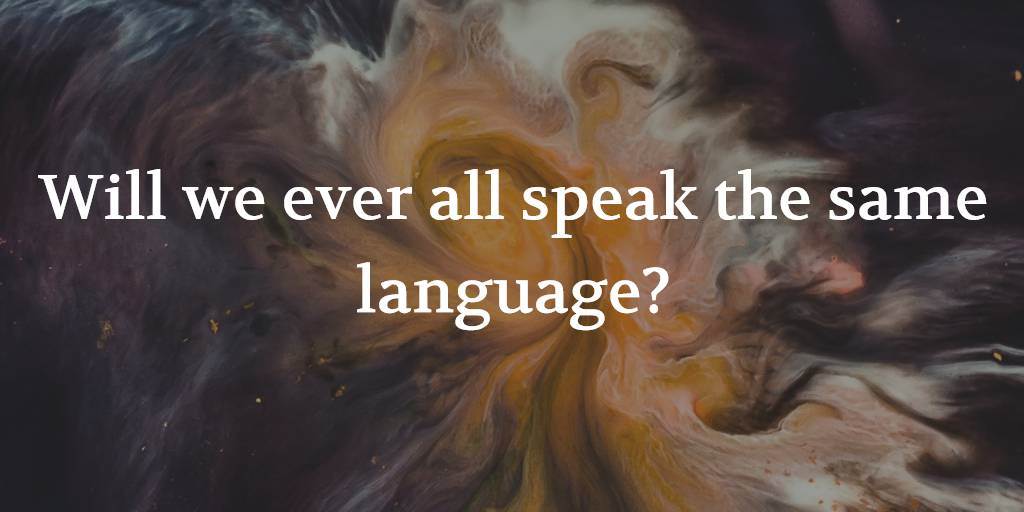 Recently on this blog, we looked at whether any single language would let you speak to everyone on the planet (see The continuing importance of translation in a globalised world). The conclusion was pretty definitive: even in the age of telecommunications and international business, there is no such thing as a universal language right now. But what about the future? Could there ever, conceivably, be a way for everyone to understand everyone else, no matter where they live?

If there’s one thing we learned last time, it’s that there’s an awful lot of people on Planet Earth and that we speak an awful lot of different languages. Getting all seven billion people – or however many people there will be in the world fifty or a hundred years from now – to all speak one language does seem like it might be a bit tricky. So let’s be generous this time around: let’s look at the chances of ending up with a language that’s spoken by about half of the global population. Enough people, presumably clustered together tightly enough that businesses can make it their primary business language. What do the prospects look like?

No-one can be certain what the future holds, but we can look at past precedent. History is full of examples of “trade languages” or any other lingua franca used to communicate across cultural borders: just think of the pan-European power of Latin throughout Roman times and even well into the Middle Ages. Or the astonishing reach of Mandarin Chinese across most of China. The term “lingua franca” is itself named after a trading language that was used all around the Mediterranean Sea for eight hundred years. But each of these languages was ultimately limited. Travel far enough, and eventually you’d always reach someone who couldn’t understand a word you were saying. This pattern holds true no matter how far back through history you go: there has never been a universal human language. Even when the very first human ancestors started to use language, different tribes probably used different words and different rules to describe the world around them.

That’s not to say there haven’t been attempts to introduce a universal language. Conquering empires have a habit of imposing their language on the people they rule, of course, but there have also been peaceful projects to promote universal languages. Perhaps the most famous of these is Esperanto, a “constructed” language whose inventor Ludwik Lejzer Zamenhof dreamt of world peace through mutual understanding. Esperanto is quite easy to learn, at least if you’re a native speaker of a European language. At a glance, you could almost mistake it for a Romance language such as Spanish or Italian. But therein lies a problem, as well: Esperanto looks a lot less familiar if you’re used to a different vocabulary, character set or grammatical structure from most European languages. As a result, although Esperanto is a very well-meaning language, it’s hard to imagine it will ever gain global prominence. It’s simply too local.

Another drawback of constructed languages is so simple, so fundamental, that it might be fatal to any attempt at creating a universal language from scratch. After all, when a language is first invented, nobody speaks it but its creators. That makes it incredibly hard for these languages to gain traction. Would an existing language make a better candidate, then? Well, as we discussed in a past article – “Global English: promises and pitfalls” – some businesses already try to use English as a universal language. The problem, as you’ll know if you’ve read that article, is that English simply isn’t ready for that role.

But could it get to that point in the future? Well, if there’s one big problem with the idea of English – or any other language, for that matter – assuming some sort of planet-wide universal status one day, it’s these two words: linguistic drift. Languages have a tendency to change and adapt over time. You can see this tendency just by reading a book from a hundred or two hundred years ago: the language used will be different from the language used in the same language today. Read something even older, and you might struggle to understand what the author meant to say. That’s linguistic drift in action, and it can potentially cause one language to split into two. When two populations are isolated from one another, their languages will drift apart from one another – even if they were originally able to understand one another to begin with.

That might not sound like a problem, now that we can communicate online and over the phone and do business with people halfway around the world from us. But when we talk about “isolation”, it doesn’t have to be total. No matter how well-connected we are to the wider world, the language we speak is always going to be most heavily influenced by the people who are physically close to us: the people we live with, socialise with, and share an office with. So linguistic drift would likely prevent any single universal language from ever coming about. And if any language ever did become a universal standard, it would still probably split up into multiple different varieties soon afterwards. Which, in fact, is exactly what happened on a smaller scale to the likes of Mandarin and Latin. Maybe the past really can tell us a lot about the future.

All in all, then, it doesn’t look like we’ll be seeing a global standard language any time soon – or maybe ever. In fact, you could probably argue that some sort of instantaneous machine translation is a more likely option for letting everyone in the world understand each other. But, like the Universal Translator in Star Trek, such a concept may itself remain science fiction. After all, machine translation still has a long, long way to go before it can match the skill of a human translator or interpreter.

So the odds look stacked against Dr Zamenhof’s dream of universal mutual understanding – but we think his hopes for world peace can remain alive and well. Because as long as we have competent, professional linguists to help break down these language barriers, the wheels of communication will keep turning, and we’ll all be able to keep talking to one another. Because here’s the surprise answer to the question we asked at the start of this article: thanks to translators, we already can understand each other and communicate everything we need. The future is now!