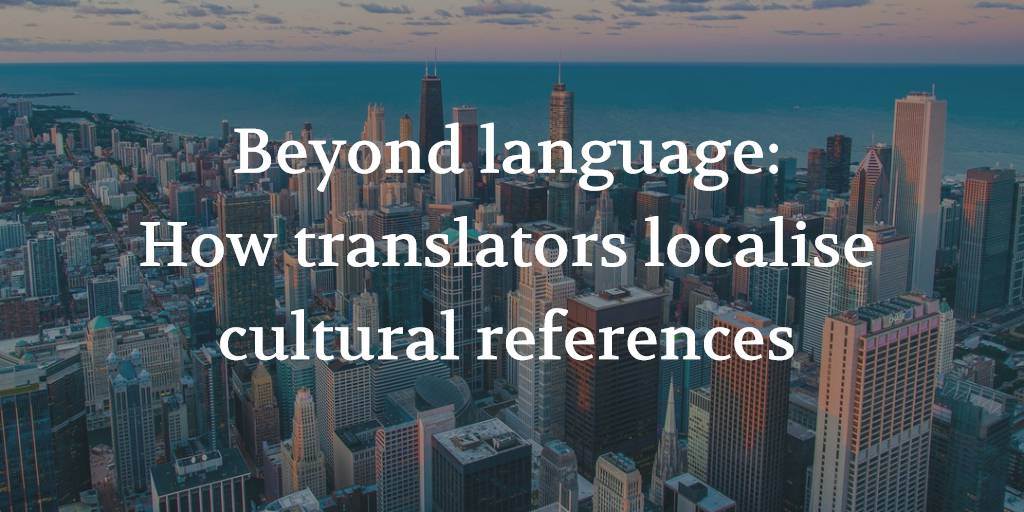 A good translator needs a wide vocabulary – in two languages, no less. They need a sound understanding of the grammatical rules they work with and a firm grip on conventions of style and tone. They need to know the rules that ensure their readers will understand and accept the texts they translate – and they need to know when it’s okay to break those rules. And a good translator also needs one other thing: the kind of creative mind and out-of-the-box thinking that can solve some of the hardest problems in translation: culture-specific references.

That’s what we’re going to be looking at today.

What exactly is a cultural reference, you might ask? It can sound like a bit of a vague concept. Broadly speaking, you can define it as an idea or a phrase that originates in the source language – the language from which the text is being translated – and which might not be familiar to someone who only speaks the target language – the language into which the target is being translated. The nature of the problem is similar to the idea of untranslatable words – something we’ve covered in a previous article, “Untranslatable? Doch!” – but here the solution is more of a conceptual one. How do we make sure that the reader will understand what’s going on in this text?

All this talk of abstract ideas is getting a bit abstract in and of itself, so let’s look at some concrete examples of the kinds of cultural references a translator might encounter. First of all, we can think about idioms. In linguistic terms, an idiom is a common saying or a turn of phrase whose meaning isn’t obvious without context or explanation. If you’re enjoying reading this article, you could start a discussion in the comments thread and we’ll have a conversation about idioms until the cows come home. And hopefully, of course, you know that there are no literal cows living on this website. “Until the cows come home” is an idiom and it means “for a long time” or “for as long as you like”. Every language is full of idioms, and they’re a wonderful way to add life and character to a text, but how do you localise one? Well, if our translator is lucky, their target language will have a corresponding idiom. It may have even borrowed that very same one. If you’re English, you might have heard the French expression l’esprit de l’escalier, sometimes rendered as “staircase wit”: the brilliant comeback which you only think of after you’ve stormed away from the argument and down the stairs. This is an idiom that is slowly creeping into the English language – and it’s a process that happens all the time.

If our translator’s target language has not been blessed with such a favorable turn of phrase, it’s time to get creative – but we’ll get to that. In the meantime, let’s look at another type of cultural reference: a set of ideas that you might call pop culture touchstones. Let’s think of an example: a universally famous and beloved pop singer in one country might be totally unheard-of in another, so what’s a translator to do when confronted with a well-known extract from such a star’s lyrics? Well, you could go for a direct translation, but do you have to know the song as a whole in order to understand that specific extract? Do the lyrics even make sense out of context? Again, sometimes the problem is more complex than it first seems.

Before we look at possible solutions to these kinds of issues, let’s look at just one more type of cultural reference, perhaps the most abstract of all: concepts or terms that just don’t exist in the target culture. Very often you’ll see this come up in political or legal contexts. How would you translate “Member of Parliament” for a country that uses something other than a parliamentary system? What about the German Bundesland, a term that reflects the delicate balance between Germany’s federal republican system and the history of each Bundesland as a formerly independent country? It’s tricky, make no mistake – especially in court or in the world of international diplomacy, where tiny distinctions of meaning can make a huge difference to the decisions people make.

So, with just a few illustrated examples, you can begin to see the kinds of problems translators face. Do they sound insurmountable? Fear not: these are exactly the kinds of situations that professional translator trains for! In fact, many say it’s their favorite part of the job since it lets them flex their creative-thinking muscles. So, then: if all the easy avenues have been exhausted, it’s time to open up the translator’s magic box of cultural-localisation tricks.

One approach is to look for a cultural analog: something from your own culture that matches the original reference closely enough that the idea still works, perhaps in a slightly tweaked format. This is great for handling idioms, metaphors, and some cultural touchstones – but sometimes it’s just not appropriate. A prime minister in one language can’t be called a president in another, even if both are the heads of the executive branches of their respective governments. Likewise, replacing one pop song with an entirely different one is no good if, for example, the original author was trying to make a point about the specific meaning of that specific song. And anyway, there’s no guarantee that such a cultural analog will definitely exist in each individual case – so sometimes there needs to be another solution.

So how about a literal translation? “Literal” is a dirty word among translators, and often with good reason. A translation that is too literal sacrifices fluency and even some meaning for the sake of word-for-word mirroring of the source text. But in some cases, when used carefully and judiciously, a literal translation may help the reader to understand a foreign cultural reference if, for example, it just doesn’t exist in the target language. A good translator will ask themselves a few questions first before deploying this tool: is it appropriate given the target audience and the purpose of the text? Will a literal translation make sense here? Is there another, the better strategy I can use? If the point is to stick as close to the original as possible, then sometimes it may even be preferable to keep the word or phrase in the source language. In this case, though, you’d have to be absolutely certain that your readers would understand it without any difficulty.

One other strategy can either be used on its own or as a complement to these other two, and it’s deceptively simple: add some explanatory text to give readers more context and information. A translator’s note can be a detailed footnote explaining the background and meaning of a reference, or it can be as small a change as adding a single word which acts as the key to unlock the meaning of a whole paragraph.

The thing about cultural references is that localising them usually isn’t a binary choice with one “right” and one “wrong” answer. There are plenty of right answers – and plenty of wrong ones, too. Something all of these strategies have in common is that they need to be used carefully and with forethought. A good translator will weigh up the pros and cons of each approach before committing to one solution or another. They may even consult with the client if the decision is particularly important or potentially controversial. But, eventually, a true professional will know how to produce a perfect, beautiful translation that suits its intended purposes exactly – cultural references and all.

Looking for the translation adapted for the target audience? Get in touch with Translators Family today to see how it works.