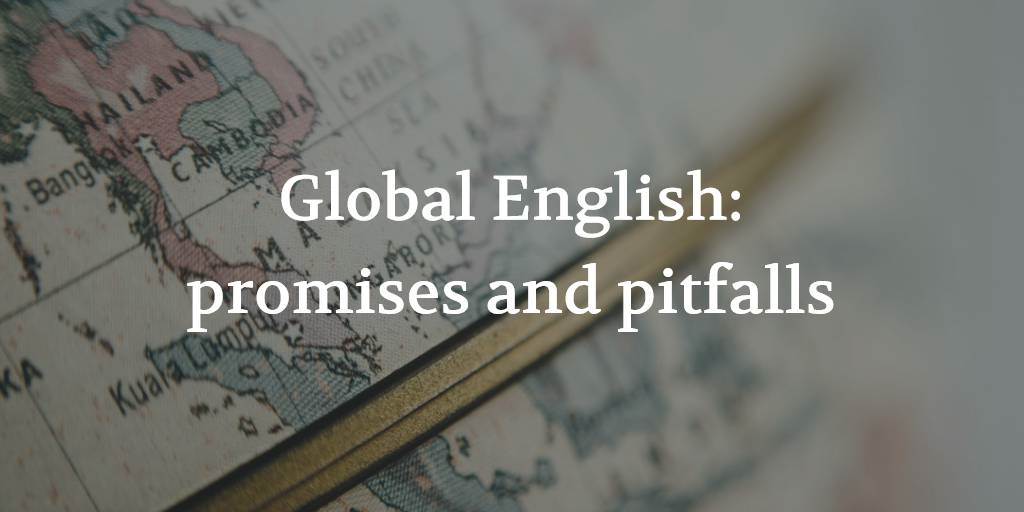 Translators working into English are sometimes asked by their customers to translate into “global English”, or some other similar term. This new variant of the English language is known by many names – international English, global English, English as a lingua franca (or ELF)… but what people usually mean by it is the kind of English that everyone – not just native English speakers – can understand. Imagine a Danish salesperson speaking to a Russian buyer; statistically, the chances are neither of them knows the other’s language, so they’ll speak English to each other instead – and the English they speak will be at a level they can both understand, possibly with some adjustments to grammar and vocabulary for ease of understanding.

In this context, global English starts to look like an alternative to American or British English; a sort of “third way”, a means of standardising the way people communicate with each other – no matter where they are in the world. On the face of it, this sounds like a great idea – international businesses love being able to reach as many people as possible, and it might look like there are potential savings on localisation work compared with producing different versions of the same document for different countries. Ideally, it would mean an end to the language barrier between the many types of English. Imagine a British person frowning in confusion when cautioned against a strikeout; for them, that might be something of a red card!

This might all sound really good, but in reality there are some real problems with the idea of global English that make it unsuitable for a professional-quality translation. The biggest issue is that there is actually no one version of this new dialect; in fact, linguists studying the field are more likely to talk about “global Englishes”, plural. Consider even German and Polish speakers: these two neighbouring countries will still each have a very different approach to a third language like English. And what about something as basic as spelling? Does global English use the American or British approach? The result is that global English actually leads to less standardisation, not more. (Or should that be “standardization”? You can see the problem already.)

Some forms of global English can even look completely wrong to a native speaker, or even to a non-native who still understands English very well. One common change is to regularise verbs more tightly than standard English – so “he goes”, for example, might become “he go”. It’s perfectly possible to understand what someone means by that, but it doesn’t look very good on a professional document!

Then, finally, there’s the question of cultural relevance. Global English has a broad reach, but that also means it can be unclear who you’re trying to talk to. If you want to really impress people, why not do it properly?

It’s a quote that any international business would do well to listen to. All of this is why customers looking to hire a translator or a translation agency are always urged to use native speakers of the target language. A native-speaker translator who understands his or her own culture intuitively will be able to produce a much better piece of writing than one person trying to address the entire world – which is exactly what global English tries to do. Every culture has its own customs and expectations, its own little quirks and standards, and addressing people in the style that’s most familiar to them will make them more receptive and more interested in what you have to say.

Still, you can never talk to every culture in the world all at once, and sometimes the most important thing is that as many people as possible hear what you have to say. So what can businesses and their translators do to strike a balance between flair and readability?

Don’t overcomplicate things. The English language has a rich and colourful vocabulary, and a clever word in the right place can make a text really sparkle. But, conversely, an abstruse lexicon might perturb your reader and dissuade them from venturing further into such a recondite text. In other words: Keep it simple! If you know your work is going to be read by an international audience, consider your choice of words carefully. Find the right balance between interesting, characterful writing and giving everyone a chance to understand what you’re trying to say – while, of course, paying close attention to the style of the source text as well.

Think about all of your readers, not just locals. We talked about cultural references earlier in this article, and there’s no question that local idioms and touchstones can go a long way towards winning an audience over and making your text enjoyable to read. But, equally, think about whether a potential international reader would understand what you’re saying if you’re saying something particularly colloquial. Otherwise, as the British sometimes say, you might be batting on a sticky wicket!

Choose one type of English and stick to it. “Global English” is, as we’ve established, a pretty vague term, and it’s usually best avoided in professional writing. But American and British English are both well-defined dialects with documented standards, and they’ll work just fine for any international audience. The UK and the USA might sometimes be called “two nations separated by a common language”, but of course they can almost always understand each other perfectly well. The USA has a larger population than the UK, but British English is closer to the English spoken in countries like Canada, Ireland, India, Australia and others. So ultimately it doesn’t matter too much which brand of English you choose – and of course there are other local variants of English, if you really want to explore your options – but whichever you decide on, try to stick to it for the sake of consistency.

The good news is that most of this is part and parcel of writing well in English anyway. A good translator will instinctively write good, comprehensible English for as broad an audience as you need. And if you need advice on how to find the right translator, why not take a look at our previous article on that very subject?

In the end, it’s all about making smart decisions and taking a moment to think before you put pen to paper (or fingers to keys!). Which variant of English do you prefer for international communication? Let us know in the comments!